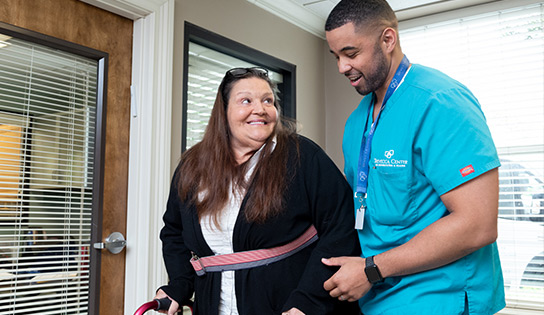 Details of experience:
Mr. Richard Bennett arrived at Trevecca Center for Rehabilitation and Healing on June 25, 2019, from Skyline Hospital. He was originally admitted to Skyline Hospital due to acute health concerns that included; cerebral infarction, pneumonia, respiratory failure, tracheotomy, sepsis, hypertension, muscle weakness, etc. Mr. Richard Bennett was referred to Trevecca from Skyline hospital. When he arrived at our community, he was warmly greeted by multiple team members from all departments. Our social services team visited him in an effort to get to know him and understand his medical history and family support, while our recreation therapy team visited to learn his hobbies and interests.

Upon admission, Mr. Richard Bennett was assessed by our therapy department. This was a crucial and sought after meeting for Mr. Bennett because his need for therapy was very high. It was imperative for our therapy team to have the opportunity to learn Mr. Bennett’s history and craft a centered care plan to ensure that he could make rapid progress.

His progress continues to grow through the support of our interdisciplinary team. With the nurturing support from our speech-language pathology team, Mr. Bennett has steadily built upon his communication skills, acquiring the ability to communicate tolerance, comprehend questions and answers, and converse in regards to his care plan.

His physical process has also grown and shown progress since his initial arrival. He at first was unable to walk long distances independently, but now he has expanded his skill set to be able to walk across the gym with little assistance at all.

Mr. Bennett was also on a trach when he arrived at Trevecca Center. He was decannulated shortly after his arrival, allowing our respiratory team to monitor breathing levels, respiration rates, and oxygen saturation levels around the clock.

Mr. Bennett remains at Trevecca Center as he continues to progress daily alongside our nursing and therapy teams. He has made mention that he has gained tremendous strength since his arrival and continues to push himself to achieve more. We look forward to sharing more progress updates as Mr. Bennett continues to shine in our therapy gymnasium.