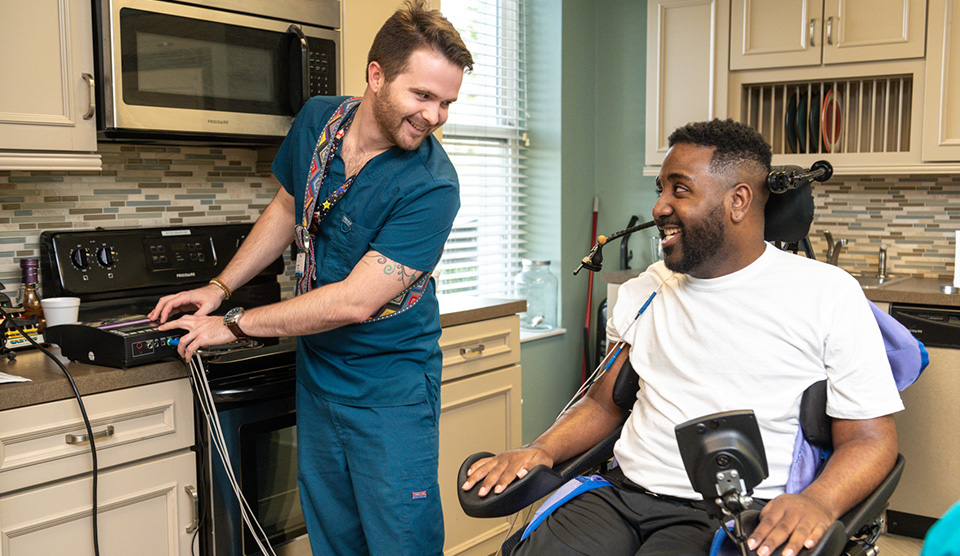 Mr. Tesfazgi Tsegaye arrived at Trevecca Center for Rehabilitation and Healing on July 15, 2021, from Ascension St. Thomas in Nashville, Tennessee. Mr. Tsegaye had been admitted to the hospital due to a wound infection on his left LLE (Lower Leg Extremity). This caused the patient to become septic with necrotizing fasciitis, resulting in a BKA (Below-knee amputation). Three different surgeons recommended amputating Mr. Tsegaye’s right leg due to his foot wound and decline in functional mobility.

Upon his arrival to the community, the rehabilitation team and wound care clinician immediately began working with him…determined to get him on the road to recovery without having to amputate his right leg. During the first few weeks, therapy focused primarily on his independence with self-care and mobility tasks. It was imperative that Mr. Tsegaye demonstrate the ability to perform tasks (Activities of Daily Living) to therapists and practice safety awareness while transferring. Wound Care’s main goal was to treat the patient’s right foot wound to prevent any further infections and complications.

By October 2021, Mr. Tsegaye began to decline due to refusing treatment from therapy and wound care. He was not participating and was not interested in healing with surgical intervention. From October to December, Mr. Tsegaye continued to refuse any treatment or assistance from staff. On December 17, he was placed in Hospice care, and his family began to plan his funeral arrangements. Due to his strong will and consistent care from the staff members in the community, Mr. Tsegaye was removed from hospice care on December 27.

One late afternoon after his dialysis appointment, something changed. Mr. Tsegaye was smiling and more alert than he was in his previous sessions with Occupational Therapy services. Mr. Tsegaye stated that he had been speaking with his Nurse Manager Nioakah about getting a prosthetic leg for his left LLE. After consulting with his doctor and Rehabilitation services, Mr. Tsegaye received his prosthetic leg victoriously! There was an immediate boost in Mr. Tsegaye’s attitude and trajectory of his overall health. After being introduced to CareRite’s CARP (Comprehensive Amputee Rehabilitation Program) offered through guidance by Paralympic Gold Medalists Todd Schaffhauser and Dennis Oehler, both amputees, Mr. Tsegaye began walking longer distances with his therapist Josh. He even began to use his walker and walked the corridor and the lobby of the community by himself!

Today, Mr. Tsegaye’s foot wound is almost 100% healed. In November 2021, the size of his right foot wound was 6.9 x 7.6 now, it is 2.5 x 2.8. Each day, he is making strides towards the betterment of his health. Mr. Tsegaye is on the waiting list for Trevecca Towers, an independent living community on campus. Mr. Tsegaye is truly a miracle with a success story to marvel at. The Trevecca Team is honored to be able to play such a big role in his healing journey!

Mr. Tsegaye wanted to close by simply saying, “Thank you.”